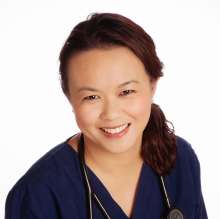 Dr. Louiza Chan received her veterinary degree from the University of Sydney, Australia in 2001. She had her first taste of shelter medicine during her externship and voluntary work during vet school. She continued to work with rescue groups and private shelters during her early years in private practice both in Sydney and in Singapore. During this period, she developed an interest in animal behavior thanks to her misunderstood Jack Russell Terrier and underwent further training through Delta Institute Australia, where she obtained her Certificate IV in Companion Animal Services (Canine Behavior), and post-graduate training in veterinary behavior medicine through the University of Sydney. Her career took an interesting turn when she was offered the opportunity to lead a behavioral program at an animal facility in Singapore, and eventually served as their clinical director and associate head, and spent 5 years working in academia. Her time working in research was valuable as it solidified her underlying passion for animal welfare and her belief in the importance of the human-animal bond.

In 2014, Dr. Chan took a sabbatical to pursue a Master of Business Administration at the University of North Carolina Kenan-Flagler Business School, and graduated with a concentration in leadership development. At the same time, she routed back to where she started and earned the Graduate Certificate in Shelter Medicine from the University of Florida. She has been a faculty member of the online program ever since.

Dr. Chan currently resides in Lafayette, Louisiana and works as a consultant in shelter management and operations, shelter design and animal behavior for both municipal and non-profit shelters and other rescue groups in the Acadiana region. She is proud to be part of the Lafayette’s No-Kill 2020 initiative, which will eventually make Lafayette one of the first cities in Louisiana to achieve a 90% Life Release Rate.